It looks like you are visiting outside the United States of America. Please visit your local website.

Edifier teams up with Playmaker for a new basketball event: The Cage

RICHMOND, BC, September 8, 2022 - The world-leading consumer audio brand Edifier is combining forces with Playmaker – a new age sports media and talent management brand with court culture as its very core – to bring about a brand new basketball event: The Cage. 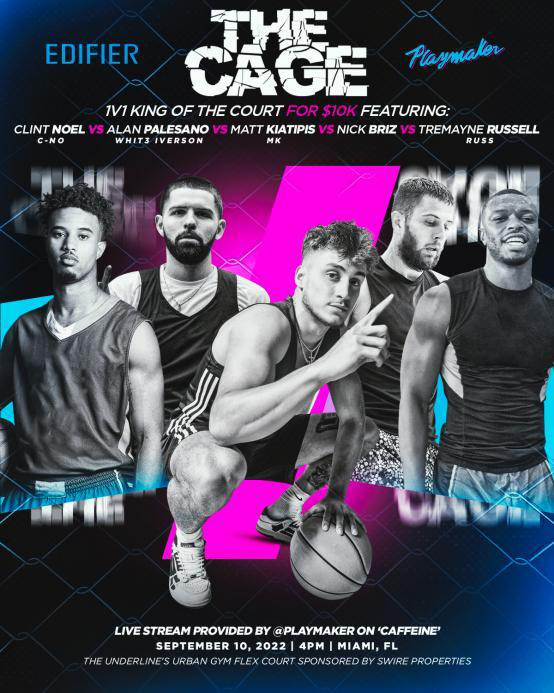 A fast-paced basketball event that pits the world’s most talented one-on-one influencers against each other, The Cage is a unique new King of the Court-style contest that combines all the drama of a concrete court in the neighborhood, with the lights and glamour of Madison Square Garden.

Alongside the event, Edifier will be offering live music from DJ Genesis as well as showcasing some of its latest products including, the D12 Bookshelf Speaker, the MS50A Wi-Fi Speaker and MP230 Bluetooth Speaker.

Additionally, the brand will be giving audiences the chance to win the new Edifier W240TN Earbuds. Perfect for a pre-game workout, the W240TN are kitted out with an industrial-chic, gunmetal finish, Coaxial Dual Dynamic Drivers (Φ6mm+Φ10mm), Active Noise Cancellation, Bluetooth 5.3 and IP55 water resistance and sweat proofing, making them the perfect addition to any sports bag.

Talking about the event, Edifier’s Global Marketing Director, Frank He said: “Our products have long been a favourite of athletes and sports people, due to their hard-wearing durability and enduring quality, so we’re beyond thrilled to help bring The Cage: a new collaboration that combines our passion for audio together with sport in a way like never before.

“Striving to always bring our customers the most engaging and exciting experiences possible, we feel that The Cage embodies our brand’s aim to break the boundaries and rewrite the rules. See you on the court!”

Designed as a fenced-in, playground-style battle for hoops, The Cage will feature five competitors who will sweat it out to win bragging rights and a big $10,000 cash prize on 10th September at The Underline’s Urban Gym Flex Court, Miami.

Inspired by the ruthlessly iconic West 4th Street Courts in Greenwich Village, NYC, the game will include two rounds. In the first, all five contestants will participate in a free-for-all match, with the top two advancing to the final stage: an all-out, 1v1 hoop fest which will decide the inaugural Cage champion.

As well as providing a live crowd, all the action will be live streamed by Playmaker over on the Caffeine app with the following influencers battling it out; Canadian hooper Matt Kiatipis; YouTube and Instagram star Alan “White Iverson” Palesano; TikTok sensation Nick Briz; and Miami natives Clint Noel and Tremayne “Coach Russ” Russell.

Basketball at its purest, loudest and fastest, The Cage is an exciting new format that will rely on no screen cuts, no breaks and certainly no passes. Focusing on what makes basketball such a visually engaging and high intensity sport, Edifier and Playmaker will combine forces to bring the most fast-paced action you can see on a court.

About Edifier
Edifier specializes in premium sound systems that showcase technological innovation and design elegance. They deliver an outstanding audio experience through a wide range of headphones, speakers, and music systems for personal entertainment and professional excellence.

About Playmaker
Playmaker is a sports & gaming media and management company based in South Florida, whose focus centers on expanding the brands of athletes and celebrities.

Playmaker has seen a digital reach of over 2.2 billion impressions over the last year throughout its various social media platforms from its digital content. On the management side, Playmaker represents some of the greatest talents in the world of sports and culture, including the NBA’s Nate Robinson, part-owner Tracy McGrady; NFL stars such as Xavien Howard and Corey Clement, and social media influencers such as Infamous Kayce, Nikki Blades, and Cassy Athena.